How did you get into digital?

Rick Lomas: Well as you can see from my photo, I’m not as young as the majority of digital marketers. So, my story goes way back to 1998.

I had been working as a Unix Systems Administrator for Reed Elsevier in London, but after 10 years of dull, but well-paid work I was made redundant. I had a nice chunk of redundancy money, so I decided to not get another job straight away. Instead I decided to pursue my electronic music side-line.

I had a reasonably successful techno/ambient/electro-dub duo called Active Loop Zone. We wrote all the tunes with an old Atari ST and Cubase. I started reading magazines like Future Music where everyone was talking about PCs. The Intel 486 DX2 was the one to have back then.

I decided to run Cubase on a PC mainly because I wanted to see Cubase in colour rather than monochrome. I was rather excited when I realised that I could buy a modem for the PC and connect to the internet. My first ISP was Compuserve who gave a free 0.5Mb of web space with each account. This meant I could build a web site to promote my music.

As I became better at building web sites I approached an old friend, Simon Burgess, who was selling Mortgage Payment Protection Insurance (MPPI) via advertorials in UK tabloid newspapers like The Sun, The Mirror and The Daily Star.

I suggested that he should sell his product online. In the first year he sold one policy, in the second year he turned over more than £1 million. Simon’s company had various names but eventually became British Insurance Services.

In 2008 British Insurance Services was acquired by Towergate for an estimated £25million. I am very grateful to Simon for looking after me financially. Although I never reached the levels of income that Simon enjoyed, I now knew that the only way I was going to make decent money was through digital marketing.

Now that I was not trying to sell MPPI, I decided to push my own web site which was a lead generation site for a motorhome hire company in the UK. I followed the same SEO strategy as we used with British Insurance; get as many links as possible without worrying about quality or relevance.

In 2011 things could not have been better. I had teams of outsourcers in India building web 2.0 properties, three PCs running SENukeXcr and other automated black hat link building tools, all running 24/7. Meanwhile I was mostly lying on a beach in Spain enjoying the best income I had ever had.

You can probably guess what happened next. In April 2012 my site received a warning from Google about unnatural links to my site. Two weeks later my income was destroyed.

What is your true specialisation?

Well this follows on from my biggest fail. In 2012 my income was destroyed due to my Google Manual Action. I had this idea back then that there would be many people in my situation, so I made the decision to become a ‘link clean up guy’. I did this initially with a Google+ group called ‘Google Penalty Mastermind’ which I later migrated to a Facebook Group with the same name. I decided to specialise in removing Manual Actions.

Do you build links too?

Not really, well not right now, but I think I will begin again in 2020. It would make sense as I am always analysing link profiles, so I have a really good idea of which links work and which links don’t.

I spend most of my time these days undoing crappy links that other people have made, so it seems slightly hypocritical to be building new ones. That said, to recover from penalties you will eventually need to build decent links to get your rankings back.

For now, I outsource my link building and I am slowly building up a network of people who I trust to do this.

From time to time I will spot a really excellent link in someone’s link profile that I fancy for my own projects too. A really good example of this is the forum at Joomla.org – if you find the right place there you can get an extremely juicy DoFollow link for free.

Why are Link Audits so important?

Because I believe links are probably the number 1 factor that Google use to rank your website.

I also believe that links are the most common cause of violations of Google Webmaster Guidelines. This, of course, can cause penalties. Crappy links can be acquired by poor SEO, negative SEO and scraper sites.

Google say that they are good at filtering out and ignoring a lot of low-quality links, but at the end of the day, I believe that your link profile is your responsibility.

How often should you do a link audit?

If you are actively building links every month, you should do a link audit every month.
If you are in a competitive or high-risk niche, definitely monthly, maybe even every two weeks.

The sites I see getting problems are almost always sites that are buying links or aggressively acquiring links.

Big corporate and authoritative web sites are not immune to penalties either. Even if a huge established website is not building links, I still think it is worth doing quarterly link audits.

What metrics are the most important?

I use LinkResearchTools (LRT) for almost everything and they have their own metrics. LRT Trust is like the Majestic TF which is a very important metric. Beyond this LRT have their Link Detox Risk (DTOXRISK) which is pretty much what it says on the tin.

I now consider traffic to be important too. I suspect lack of traffic is how Google are starting to detect PBNs now i.e. why would a blog have such amazing metrics but no traffic?

What metrics are less meaningful to you?

Sorry Moz, but your metrics DA and PA don’t seem to mean much anymore.

What do you hate about the SEO industry?

Well the importance of link building isn’t going away soon for sure. I do however think that it’s all got to look as natural as possible.

I believe Google only likes to see a link on a page if it seriously enhances the reader’s experience. If someone clicks that link and ends up on your site and then interacts all the way to your ‘thank you’ page, that can be considered a very powerful link.

So, we need to think about the link on site A linking to site B as an actual hyperlink to take you from A to B, not just something to enhance the power of B.

At the end of the day, Google just want to keep their searchers happy. They need to find the web sites that answer their questions and needs, with the minimum of friction. Getting frustrated with searching is not what Google want.

I think one of the main things that we are all noticing now is that you do not need tons of exact match anchors to rank for a certain keyword. In fact, I don’t think you need any at all. As an example, I just did a Google.com US search for “buy dog food online”.

What would you do tomorrow if links are no longer valid?

I’d probably get into PPC and CRO while I worked out what the hell was valid. But also, because of what I said above I’d try and work out exactly how I can keep a visitor to my site happy. To clarify: they searched for something and they found what they wanted. I think this is the goal of a search engine.

Tools of the trade and why?

Tools are cool, but it’s experience and using the things that makes you good at your trade. If someone gave me the best gardening tools in The World my garden would still look shit! I hire my friend Aaron to make my garden look nice, because he has the skill and experience.

I’ve learned to use LinkResearchTools or more specifically Link Detox since 2013 which is what I use mostly. It’s not perfect by any means and rather expensive, but it does get the job done.

I also use SEMRush for analysing traffic drops, keyword research and fixing on-page problems. SEMRush is a good all-round tool and clients are usually quite familiar with seeing reports and screenshots from SEMRush.

OK some of these guys get me work, so I might be a little biased:

Matt Diggity: You’ve gotta love him for his passion and his statistical approach to SEO. Also, the fact that he shipped himself out from California to live in Chiang Mai is very cool. Check out his Diggitymarketing.com

I have only known Craig for about a year or so, but I love his ‘dark side’. It’s not just the black hat PBN stuff, but some other knowledge bombs he drops that makes you think “Holy crap! Why didn’t I think of that?”.

I liked Ross from the moment I met him at LRTcon in Vienna in January 2019. We have a mutual interest in playing live music which is cool. For a young guy, Ross is a very knowledgeable, confident and innovative SEO. He’s a great public speaker too. I really think he will go far.

Gareth is an outreach guru. He uses PitchBox in such an awesome way. If anyone wants some serious links building, I’ll send them to Gareth. https://twitter.com/SimpsonGareth

This is the only guy here that I haven’t actually met in person. Oddly enough he’s the one I do the most work with though. Krzysztof is a little bit like the Polish equivalent of me. When I get overloaded with penalty work, I get Krzysztof to help me.

The difference is that you won’t find Krzysztof at any SEO conferences. He doesn’t listen to any ‘advice’ offered on the internet either. He digs into his data, finds footprints and comes up with his own strategies for fixing penalties.

Conferences to attend and why?

I always try and go to BrightonSEO. I’ve seen some good talks there, but it’s the ‘off menu’ stuff that I get into. I mean like late night SEO discussions with Michael Geneles, Gareth Simpson and Ilya Moskovoy in Revolution. People like Craig Campbell and Gary Wilson are usually involved in some private events around BrightonSEO, so it’s good to try and get invited.

I should also mention LRTcon in Vienna. I spoke there in January 2019 and I am booked to speak again in May 2020. There has only been one so far, but it was really good. The event also raised an incredible 43,545€ for the Austrian charity SOS Kinderdorf.

There were some excellent speakers there including the hilarious Grant Simmons and Matt Diggity himself. In 2020 Grant is back and we have my amazing friend Aleyda Solis from Bilbao too. It’s gonna be great.

I’m looking forward to going to Matt Diggity’s Chiang Mai SEO in November. I’m sure it will be amazing. There are quite a lot of people going that I have only met online. It will be great to meet everyone in person. 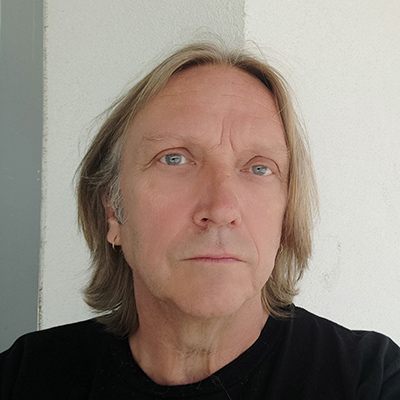 Rick Lomas is from the UK but has been living in The French Alps since 2003. This is where you will probably find him playing bass guitar somewhere. In his spare time, he will probably be off somewhere sunny with his family or messing about in the mountains with an e-bike. Rick can be contacted at LinkDetective.com where you can get help with link audits, Google manual action removals, site migrations and anything to do with links. Rick is also an admin of Charles Floate’s Proper SEO Group.